I am certain you will agree that in winter, there is nothing better than hot soup, when you get home on a cold night after a long day at work. At times, I prefer a nice colorful minestrone soup, some steaming hot broth, or a creamy vegetable soup rather than pasta or other heavier dishes. 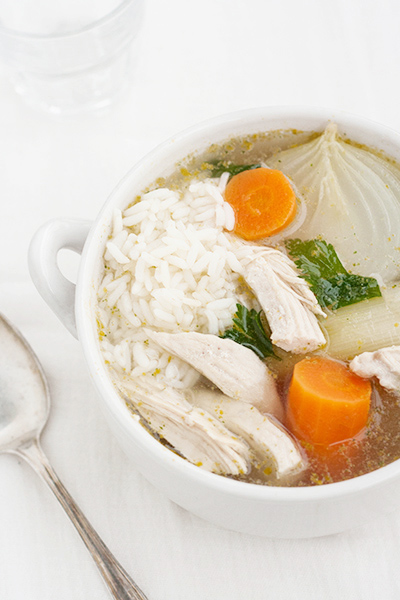 This month, we will be talking about soups on Italian Table Talk (English speaker? See the English version!), the project on Italian cuisine that I share with friends Giulia, Valeria , and Emiko.
My contribution to today’s Italian Table Talk is on the topic of a recipe for the simplest and best soup I know, chicken soup, more commonly nicknamed “shtetl soup” at my house, for reasons I will tell you in the post.

At my house, chicken soup is the comfort food par excellence. Its enveloping scent and its rich flavor are forever associated with the thought of mother, or grandmother stirring the broth in the pot in the kitchen.

In Italy, broth is typically eaten during holidays, for example at Christmas, when it is found at the table enriched by tortellini; but Jewish families enjoy it much more often. In fact, Jewish mothers believe that chicken soup is a cure for whatever ails you, hence the American habit of calling this soup Jewish Penicillin.
I suppose this nickname is not quite fully politically correct, but it was most certainly created within a Jewish context. Jewish comedians have always made their mothers a character of legendary proportions, always shown in the kitchen preparing food, often the much talked about chicken soup, to care for their families.
As expected, the typical Yiddish mother can also be found at my house. It seems that throughout my life, even a tiny sneeze always resulted in a nice bowl of hot chicken broth being immediately shoved under my nose. It is not scientifically proven that the soup actually cures diseases, but I can attest, as a chicken soup guinea pig, that it is a panacea for colds, stomach aches and many other ailments. Moreover, regardless of the scientific basis of this belief, it seems obvious to me that a soup lovingly prepared by mother would make us feel better; love is the best medicine!

At home, chicken broth is nicknamed “Shtetl soup”. This nickname derives from the fact that this dish is often associated with Ashkenazi Jewish cuisine, namely, that of the countries of Eastern Europe, where the Jews lived in small towns called, precisely, shtetl.
People in the shtetlekh often lived under conditions of great poverty, and chicken farming was a valuable resource at a relatively low cost to keep entire families fed. Hence the use of chicken, and chicken broth, in many traditional Ashkenazi cuisine recipes.
Every family tried to get at least one chicken for Shabbat meals, at times through huge sacrifices, and used it to the fullest, making use of every part. With less than prime, but still tasty left over chicken parts, such as the neck, wings, and bones, they made soup.

Everyone has their own way of preparing chicken soup; making broth is a simple and ancient custom, common to all cultures, thus there are basically as many recipes as there are cooks preparing it. I am offering you my individual recipe, but feel free to add vegetables or herbs to taste, until you find your perfect flavor.
This recipe should yield a rich, tasty, and nourishing broth, perfect to be served alone, or also with carbohydrates such as pasta, rice or, even better, the classic matzo balls, one of the main cornerstones of Eastern Jewish cuisine.

If you are not in great shape, or if someone you love appears a bit worn out, make a nice cup of chicken soup. It will surely make anyone feel better!