Persian “jeweled” rice is a very particular recipe that Jewish women from Persia, the current Iran, brought with them here in Italy. Now many Jewish families, coming from other countries, prepare this rice of Shabbat, because it can be prepared in advance, and heated before serving, or even consumed cold.
Obviously, each family prepares it differently; this is our recipe, slightly simplified compared to the traditional one.

If you have never tried this special rice, you have to do it; not because the rice is exceptionally good, which it is, of course, but to experience the thrill of competing with the other diners for the best part of the dish, the tahdig, namely, the crunchy and singed rice bottom at the bottom of the pot. 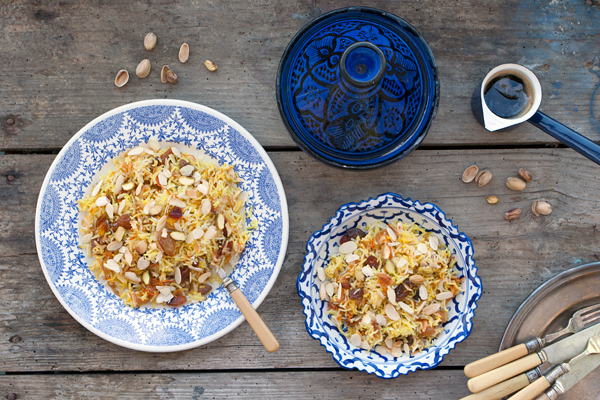 Remember to explain to your guests, who might be a bit perplexed, that the bottom of the pot is the best part, and it is considered a gesture of friendship and respect to give it to someone! Those who are not used to it, might think they have received the worst part of the dish, whereas on the contrary, there is nothing better than the golden rice crust! 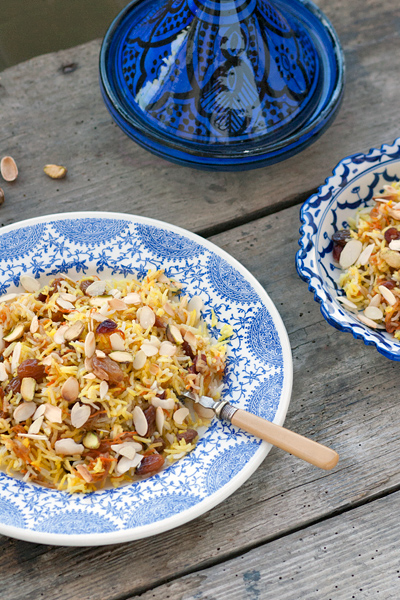 To prepare 3 to 4 portions of rice, you will need

Wash the rice and boil it for seven minutes in previously salted water, then drain it and put it aside; in the meantime, soak the dried fruit in hot water for about twenty minutes.
In a large frying pan, heat the oil, brown and soften the onion, then add the carrots cut into julienne strips, the orange peel (better if dry), the spices to taste and, if you want to get a more sweet and sour rice, add a teaspoon of cane sugar.
Transfer all the dried fruit, previously soaked, to the pan with the carrots, and sauté it all for a few minutes.
Prepare a new pot for the second cooking of the rice: choose one with a heavy bottom, even better if double, and grease it with a little oil.
Transfer a layer of rice and a layer of vegetables to the greased saucepan, alternating until there is no more left. Cover the saucepan with its lid, and cook the rice over medium heat for 15 minutes.
At this point, open the pot and pour a glass of hot water, in which you have previously melted the saffron, along with two tablespoons of oil; immediately cover the pot with a dishcloth and then seal it with the lid, folding the dishcloth over it.
Cook the rice over very low heat for 50 minutes, then turn off the heat and let it rest for 10 minutes before opening the lid.
In the meantime, separately toast the almonds and pistachios until golden brown.
Gently transfer the rice from the pot to the serving dish, leaving aside the best part, the crispy layer, or tahdig, on the bottom of the pot, which you will reserve for the most welcome guest.
Decorate the rice with almonds and pistachios, then serve, adding a tablespoon of tahdig for each diner. 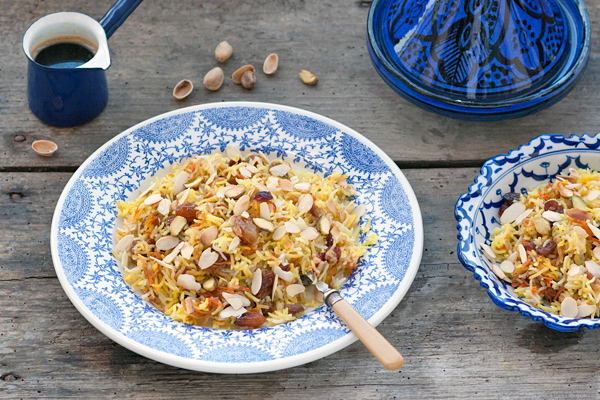 Do not forget to finish the meal with a nice cup of Arabic coffee!
Arabic coffee, or qahwa, is prepared by mincing some cardamom seeds, which you have already used for this recipe, along with the toasted coffee powder.
Prepare a teaspoon of powder for each diner, then fill a small pot of water, adding one cup per person plus half a cup which will evaporate during preparation; bring the water to a boil and pour the mixture; when the coffee is boiling, remove it from the heat, mix it, and bring it back to a boil, repeating the operation two, or three times.
Turn off the heat, pour the coffee in the glasses, and don’t forget to wait for the powder to settle on the bottom of the glass before drinking! 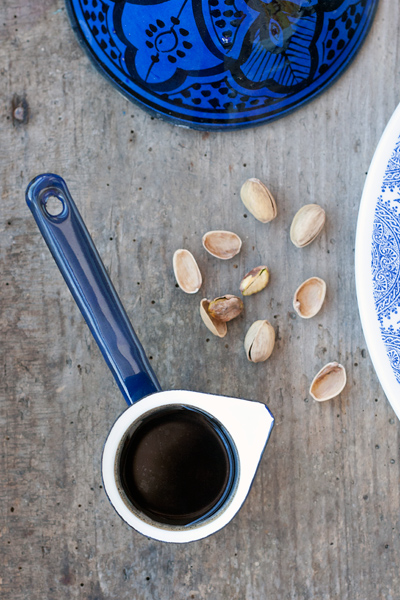