Back when I was in Italy in November, I took some photos for the home-delivery services of Snubar, a very good kosher catering business that offers Kosher Middle Eastern/Lebanese cuisine in Milan and surroundings. One of Snubar’s specialties is arayes, a simple but ingenious Lebanese dish that is a major hit in Israeli restaurants. What are arayes, you ask? imagine a pita cut in half, stuffed with well-spiced minced meat, cooked on the grill: the crumb absorbs the juices of the meat, while the crust gets crunchy and a little charred. Isn’t your mouth watering already? 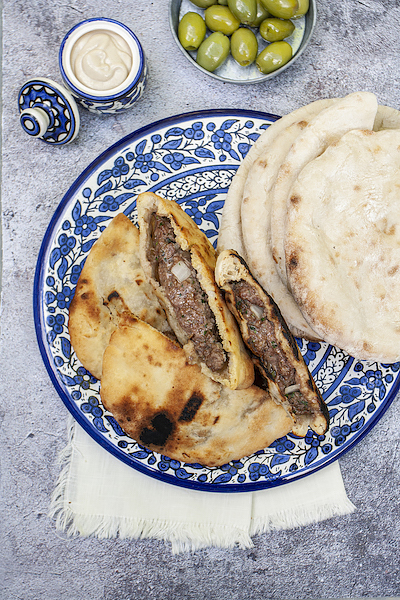 As this week we celebrated Yom Ha’azmaut, Israel’s independence day, I thought I’d dust off my favorite arayes recipe, which is found in the book “Shuk” by Einat Admony and Janna Gur, published by Artisan (the same publishing house that will soon publish my book on Italian Jewish cuisine!).
If you are a fan of Ottolenghi, and you like the multi-ethnic cuisine of Israel, you can’t miss this book: it contains not only a lot of delicious recipes, but also a lot of useful tips if one day – when traveling will be safe again – you’ll visit Israel. Einat’s passion for the markets (shuk) of Israel really shines through every page!

Do yourself a favor and try making arayes, maybe this coming weekend: you won’t regret it. If you have time, make your own pita, too: it will be the best lunch or dinner ever! 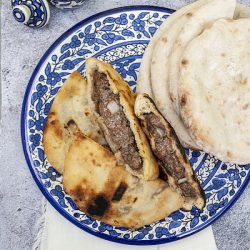 Imagine a pita cut in half, stuffed with well-spiced minced meat, cooked on the grill: the crumb absorbs the juices of the meat, while the crust gets crunchy and a little charred. Isn’t your mouth watering already?
Stampa Save on Pinterest Share on Facebook
Prep Time 20 mins
Cook Time 12 mins
Course Main Course
Cuisine Middle Eastern
Servings 6

Serve with homemade tahina (or hummus, or both) and Israeli salad!