For this month’s issue of Italian Table Talk, the lovely project about Italian food and traditions which I proudly share with my friends Giulia, Valeria and Emiko, the girls and I have chosen a wonderful, very festive topic: Carnival, possibly the most typical and picturesque Italian holiday. 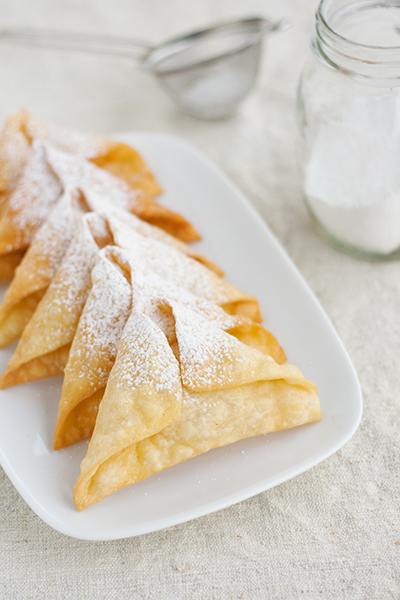 Carnival is a festive season which occurs immediately before Lent, during February. At this time of year, in Italy, you easily see colorful parades in every city, with children dressed up in masks and costumes, throwing confetti and streamers to each other.
Between Italian Jews, Carnival is commonly associated with Purim, a Jewish holiday that takes place in the same days and is characterized by the same jolly spirit; Carnival and Purim have lots in common, like the recipe I’m sharing with you today, that of Italian Jewish style chiacchiere or orecchie di Aman (Haman’s ears). 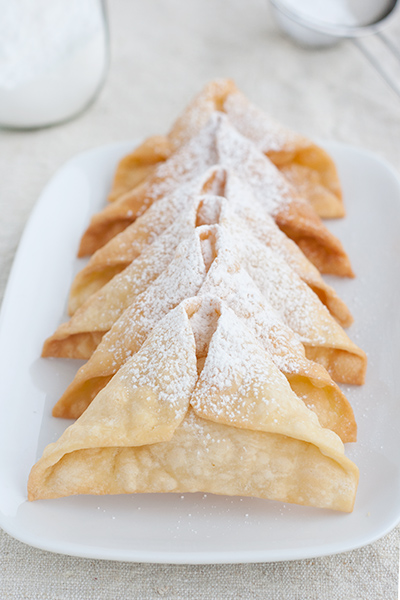 Purim is a very happy holiday that commemorates the deliverance of the Jewish people in the ancient Persian Empire from destruction in the wake of a plot by Aman, an evil counsellor of the king of Persia: to make it short and clear, it’s just one of the many times in the year in which we celebrate the fact that someone tried to get rid of our people and failed utterly.
What is interesting about Purim, in relation to Italian Carnival, is that these two holidays have lots of things in common: both are celebrated with abundance of food and drink, public displays of jubilance (like shows, parades etc) and masquerades, a custom that probably originated among the Italian Jews at the end of the 15th century and spread across Europe.
The two holidays being so similar, it’s not surprising to notice that Italian Jews have adopted, probably during the Middle Ages, one of the most traditional Carnival recipes: that of chiacchiere, which we call orecchie di Aman, Haman’s ears. 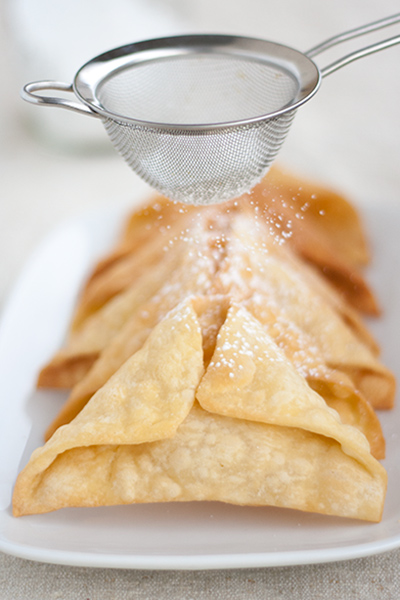 Haman’s ears, not to be confused with ashkenazi hamantaschen, are thin, crisp layers of fried dough, cut in the traditional triangular shape and covered in sugar: they’re just the same as Italian chiacchiere, with the only exception of the different shape, as Italian chiacchiere are shaped like simple rectangular stripes.
I really have no clue about the meaning of the traditional triangular shape: in Hebrew, the nameHaman’s ears  may have come from the tale of Purim, where we read that when Haman was defeated, he was bent over with shame and humiliation (literally with clipped ears), or from the shape of Haman’s hat, which is said to be triangular, but we really don’t know. However, who cares about the actual reason? I’m very happy to continue an ancient tradition, even if I don’t know the exact reason for it.

There’s a funny Jewish story on this topic.
A Jewish mother says to her daughter to cut the fish tail away before putting it into the baking tray to cook it; the daughter asks why is she supposed to do so, so her mother tells her that that’s what her mother used to do and suggest she asks her own mother, the girl’s grandmother. So the girl goes to see her grandmother and asks her why did she cut the fish tail, but she gets the same answer from her grandmother: that’s what her great grandmother used to do. So eventually, the girl goes to see her old great grandmother, to ask her why did she – and everyone in the family – cut the fish tail before cooking it, and the great grandmother answers “I don’t know why your mother and your grandmother do this; I used to do so because the fish wouldn’t fit in my baking tray”.
Ain’t this so typically Jewish?! We’re so obsessed with traditions! :)
So, now, after a good laugh, let’s read the recipe we were talking about. 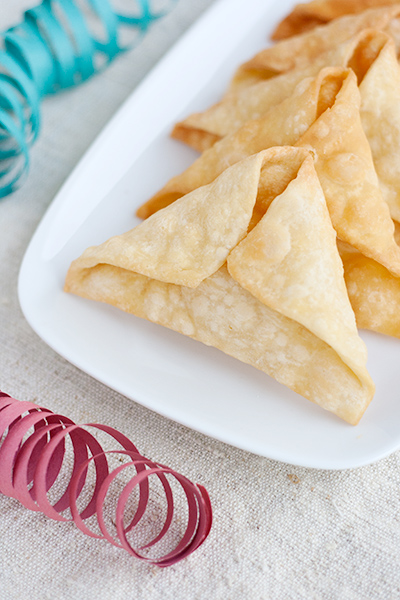 Check out more lovely stories and recipes about Italian Carnival visiting my fellow Italian Table Talk bloggers, Giulia, Valeria and Emiko, and join the conversation with the hashtag #ITableTalk on Twitter.