Our work, especially with reference to Italian Jewish cooking, has been featured on numerous news outlets in Italy and abroad, such as Corriere della Sera, The Washington Post, Cosmopolitan, Elle a Table, Saveurs, Vogue and many others. 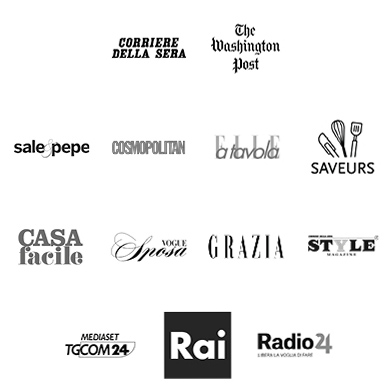 We appeared on TV for the first time ever in 2012, during an episode of CoolTour on RAI5.
On the occasion of the Jewish Easter of 2013, we were interviewed on TG3 by our friend Veronica Fernandes.
Also in 2013 we have been invited as guest speakers in the TV show La Prova del Cuoco on RAI1 together with the pizza master Gabriele Bonci.
In 2014 we appeared in the programme Sorgente di Vita on RAI2, in the special edition dedicated to the initiative “Jewish and the City” in Milan, with a show cooking on Jewish Italian food.
We have also been  interviewed on Radio24 in the programme “Indovina chi viene a cena”, conducted by Valentina Furlanetto.

If you are a writer or a producer who wants to gather information on the marvels of Jewish cuisine in Italy (or abroad!), or you are simply someone who would like to interview us, feel free to reach out through the form below.

Welcome to Labna!
We are Benedetta Jasmine Guetta and Manuel Kanah and we've been running this website since 2009.
We specialize in Kosher and Jewish recipes, from Italy, the Middle East and beyond.