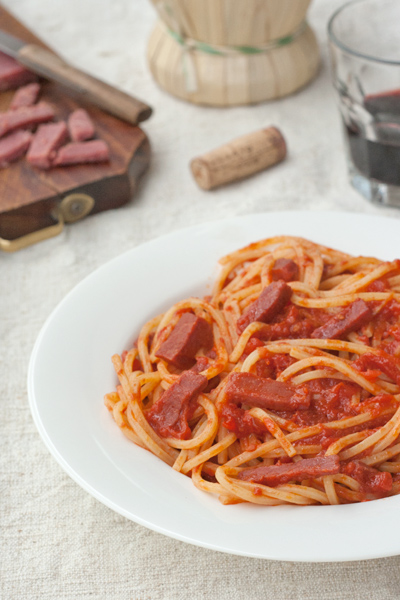 The chosen theme for this month’s episode of Italian Table Talk, the lovely project about Italian food and traditions which I proudly share with my friends Giulia, Valeria and Emiko, is salumi, charcuterie, probably one of the few food related topics I’m not at all familiar with. In Italy, the consumption of prepared meats – predominantly made from pork – is a traditional habit: as the saying goes, no part of the pig goes wasted, as basically every part of the poor beast goes into ham, sausages, bacon, salami etc. However, (un)fortunately, being Jewish makes it basically impossible for me to enjoy all these delicious (so I’m told!) types of cured meats, because meat must comply with certain rules to be consumed by Jews, and that is definitely not the case with most Italian salumi.
According to the laws of the Torah, our sacred book, the only types of meat that may be eaten are cattle and game that have cloven hooves and chew the cud: pork is obviously forbidden, while animals such as bulls, cows, veals, sheep, lambs, goats are all ok.
But there’s more to our rules than that: traditional Jewish thought has expressed the view that all meat must come from animals which have been slaughtered according to Jewish law.
These strict guidelines require the animal be killed by a single cut across the throat to a precise depth, causing the animal to die instantly without unnecessary suffering
To ensure the minimum suffering to the animals, such slaughter is performed by a trained individual, with razor-sharp knife which is checked before each killing to ensure that it has no irregularities (such as nicks and dents). Rabbis usually require the slaughterer, known within Judaism as a shochet, to also be a pious Jew of good character and an observer of the Shabbat. In smaller communities, the shochet was often the town rabbi himself, or a rabbi from a local synagogue, but large slaughterhouses usually employ a full-time shochet if they intend to sell kosher meat.
Easy? I’m not finished with the rules yet! The Torah prohibits consumption of blood as well. This is the only dietary law that has a reason specified in Torah: we do not eat blood because the life of the animal (literally, the soul of the animal) is contained in the blood. To comply with this prohibition, it is necessary to remove all blood from the flesh of kosher animals, thus a number of preparation techniques became practiced within traditional Judaism.  After the animal has been slaughtered and the meat has been treibered, the meat is soaked in a bath in room temperature water for a half hour to open the pores, then is placed on special salting tables where it is salted with coarse salt on both sides for one hour, to draw out the blood by osmosis. The salt is then washed away, and the meat is ready for use.
As you can easily guess, keeping kosher is not very easy, and the very idea of making charcuterie out of what is left for us to eat after all this process sounds a little weird: after all that the meat (and the burcher!) has been through, one can’t really be bothered to make anything but a nice steak.
There are, to say the truth, some types of kosher cured meats made with beef that vaguely look like Italian salami, but I’m told that they’re definitely not as tasty as the original stuff, and that makes sense to me. 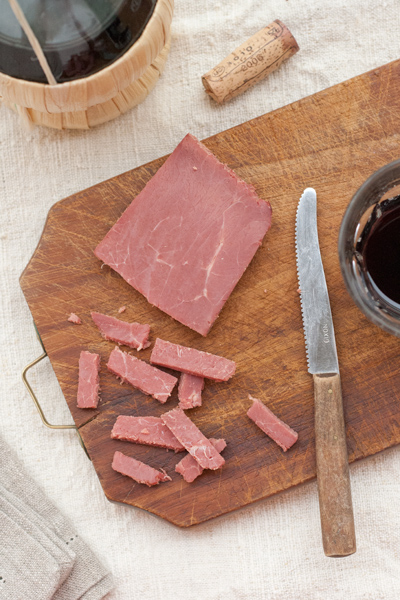 In my opinion, the closer we get to charcuterie, a part from the aforementioned imitation of salami, are “bresaola” and “carne salata” in general.
Salted beef is air dried and is aged for some time – a couple of weeks for carne salata, two or three months for bresaola – to ensure its preservation over the year, and is thinly cutted as needed.
While I never tried to cure my own bresaola, it’s an old tradition in the Ghetto of Rome to make carne salata at home: carne salata is easy to prepare, and is a perfect substitute for pork in classic Roman recipes such, as carbonara, amatriciana and gricia, that call for jowl bacon, guanciale.
You can buy carne salata in kosher butchers or make it at home by salting and air drying your own meat (the best part of beef for the task being top sirloin) during winter, the best time of the year for curing meat.

So, if you can get your hands on a fine piece of carne salata, please have a go with my amatriciana kosher style: is just as tasty as the original one, and a lot healthier! 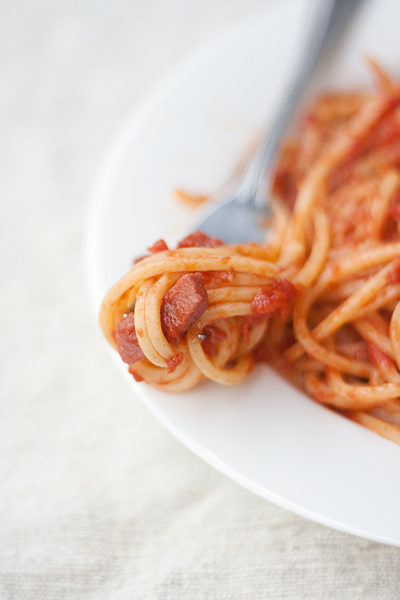 Check out more interesting stories and recipes about Italian charcuterie visiting my fellow Italian Table Talk bloggers, Giulia, Valeria and Emiko, and join the conversation with the hashtag #ITableTalk on Twitter.